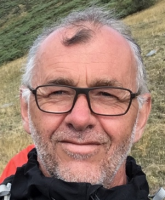 Since 1996 he works in Centre de Recherche Paul Pascal – CNRS, Bordeaux University in Pessac, France, currently at the position of senior research.

Research interests:
Alain Pénicaud is a CNRS material scientist specializing in carbon. He started his career crystallizing fullerenes to turn later towards dissolving seemingly insoluble forms of carbons such as graphite and carbon nanotubes. He has pioneered the use of reductive dissolution by showing in 2005 that true solutions of exfoliated carbon nanotubes could be obtained by dissolving alkali metal salts of nanotubes. He later applied that to graphite to obtain graphene solutions in 2007. Recently, his team showed that single layer graphene and individualized nanotubes could be stabilized in water without surfactants nor sonication, by hydroxide adsorption. Within the Plascarb European Carbon, A. Penicaud's team has also showed that performing graphene based electrocatalysts, supercapacitors and conducting inks and rubbers could be obtained from food waste, opening perspectives for carbon material contributions to a more sustainable world. While the attention has somewhat moved away from graphene to other (non-carbon) 2D materials, A. Pénicaud is exploring the chemistry of other carbon forms.

Summary of publication activity and other R&D results:
Alain Pénicaud has published above 70 publications in peer-reviewed journals which received more than 2000 citations. His Hirsch factor is 24. He is the inventor of 8 patents, 3 of them being under a license contract. A. Pénicaud has also a keen interest into divulgation and has published a few articles and two books on that subject (Editions Ellipses).

He is co-founder and shareholder of the Carbon Waters, a start-up company created in Dec. 2017 exploiting research results of his laboratory.