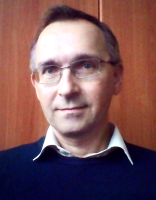 Positions: Professor at the Department of Physics of Lomonosov Moscow State University; Head of Lab of Nano-Theranostics of the Institute of Engineering Physics for Biomedicine, National Research Nuclear University MEPhI; Leading Researcher at the Lebedev Physical Institute of the Russian Academy of Sciences, Moscow, Russian Federation

At the NANOCON´19 conference Prof. Timoshenko will present an invited lecture “Silicon-based nanoparticles for biomedical applications” at the session C.

Research Interests and main results:
Prof. Timoshenko’s Lab is focused on formation and investigation of solid state nanoparticles (NPs) with tailored properties for applications in biophotonics, biosensorics and biomedicine. Silicon (Si) based NPs prepared from porous silicon are explored as efficient photo- and sonosensitazers for therapy and diagnostics (theranostics) of cancer both in vitro and in vivo. Laser- and plasma-ablated Si NPs are studied for application in radio-frequency electromagnetic hyperthermia of cancer. Highly luminescent Si NPs are produced and investigated as labels for applications in photoluminescence, Raman, nonlinear optical bioimaging and MRI as well as for UV protection of human skin. Antiviral and antibacterial effects of NPs have been found and investigated.

At the Institute of Engineering Physics for Biomedicine of University “MEPhI” Prof. Timoshenko is involved in development of new methods of early diagnostics and mild therapy of cancer, including nuclear medicine approaches.

Publication activity and Awards:
He has authored and co-authored 375 works that have been cited more than 4.200 times. Hirsch index: 35.

He has received the Shuvalov Prize from Lomonosov Moscow State University in 2002.