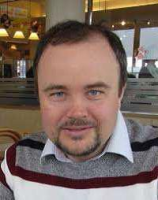 Position: Head of Physics department at the Faculty of Electrical Engineering of the Czech Technical University in Prague and Senior researcher at the Department of Thin films and Nanostructures, Institute of Physics, Czech Academy of Sciences

Specialization: Fabrication, characterization, and understanding of nanostructures based on organic and inorganic semiconductor materials

Education and Career Accomplishments:
Dr. Rezek (*1973) received doctoral (Ph.D.) degree at the Faculty of Mathematics and Physics, Charles University in Prague in 2001. In 2013 he has been habilitated (associated professor) in the field of Applied physics at the Faculty of Mechanical Engineering, Brno University of Technology.

His research career started in the research group of Dr. Jan Kočka at the Institute of Physics, Czech Academy of Sciences, working on silicon thin films for solar cells (1996). As a post-doc he worked in a group of Prof. Martin Stutzmann at Walter Schottky Institut of Technische Universität München on modification of diamond surfaces for sensors and electronic devices (2001). In the Nanotechnology Group of Prof. Andreas Stemmer at the Swiss Federal Institute of Technology (ETH) Zürich he focused his research on nanotechnology at liquid/solid interfaces (2002-2004). Then he moved to the Diamond Research Center of National Institute of Advanced Industrial Science and Technology (AIST), Tsukuba Japan, where he worked on surface-functionalized diamond devices (2004-2006).  Since 2006 he worked as the Purkyně Fellow and research team leader at the Department of Thin Films and Nanostructures of the Institute of Physics, CAS.

In 2011 he has received JSPS Invitation Fellowship at the Energy Technology Research Institute (ETRI) of the AIST, Tsukuba, Japan (host researcher Dr. Daisuke Takeuchi). In 2015 he became head of the Department of Physics at the Faculty of Electrical Engineering of the Czech Technical University in Prague.

Research interests and results:
Fabrication, characterization, and understanding of interfaces and nanostructures based on inorganic semiconductor materials (mainly silicon, diamond), organic molecules (organic dyes, proteins) and cells. Physical and chemical parameters are employed to merge these materials and to control their growth, orientation and position. Measurement and correlation of structural, (opto-) electronic and chemical properties and phenomena on a microscopic level plays a fundamental role in this research. Experimental work is supported by theoretical calculations of structural and electronic properties. Based on the microscopic and macroscopic measurements, physical models of arrangement, properties, and functional mechanisms are constructed. Functionality (such as charge transport and transfer) is characterized with view to target applications in electronics, biomedicine, environment, and security.